The landscape of the Radley Lakes area has been shaped by its geology, by the changing course of the River Thames, and by gravel quarrying and landfilling in the last 70 years.  The result is a rich variety of habitats and scenery.

Around 150 million years ago, most of what is now Oxfordshire was covered by a shallow sea. As a result, the underlying geology of the Radley Lakes area is clay, laid down as sediment on the seabed.

Many millions of years later the landscape of England was shaped by ice sheets and glaciers in a series of ‘ice ages’, as the climate alternately cooled and warmed. These changes, which took place over the last 2 million years, led to the River Thames laying down great beds of sand and gravel, eroded from hills upstream.

Geologists refer to these beds as ‘terraces’. The higher the terraces, the older they are. This is because the sea level and thus level of the river was higher in the past. The Lakes area is on the lowest, so most recent, terrace which was laid down about 50,000 years ago.  This terrace made the Radley Lakes area attractive for human settlement … and in recent times attractive for mineral extraction.

Some 50,000 years ago the Thames had a similar course as today, but differed in character. Because the sea level was lower, the fall was steeper and faster. It flowed in a wide shallow valley, cut into the underlying clay, depositing sand and gravel in its bed, This created a constantly shifting pattern of channels and sand bars. When Longmead was being quarried one of these early channels was found to contain the bones of bison, bear and wolf.

The end result was a floodplain filled with sand and gravel, with multiple river channels and higher islands of gravel between them. These islands were to be attractive places for prehistoric settlement. Some of the field names today, such as Bruney and Goosey, end in ‘ey’, from a Saxon word meaning ‘island’.

Over the last three thousand years or so, when more land upstream was being ploughed, the slower flowing Thames deposited a clayey silt known as ‘alluvium’. This has filled in old channels and partly covered some of the islands.

The landscape of the Lakes attracted early settlers. There was an ideal mix of drier land for homes and cultivation, grassland for grazing and fisheries in the river.

Over time human activity changed the landscape. Woodland was cleared, and the higher ground away from the river was ploughed for crops. The wetter floodplain provided rich grazing and hay meadows, supplying winter food for livestock.

The river course began to be managed. In Saxon times, boats from Oxford often came past. In about 1050 AD, part of the channel near Thrupp became silted up, so Abingdon Abbey created a new channel (later called Nyatt Ford) closer to Thrupp. Later, in about 1570, an Abingdon mill owner was sued for holding back the river in this new channel to create a faster flow downstream.

Today the river runs south of Nyatt rather than through it. It still floods but follows a far much tidier course. Nyatt Ford is just a narrow ditch.

From about 1950 onwards, quarrying began to extract the gravel which had been deposited by the river tens of thousands of years before. The landscape was to be transformed.

One by one, the arable fields were dug for gravel. Once a quarry had been worked out, the resulting deep pit filled naturally with groundwater.  Some quarries have remained as deep lakes, most notably Thrupp Lake. Others, in the north-east and south-east of the area, were filled with pulverised fuel ash from Didcot power station and were restored to nature conservation. Some infilled quarries were never properly restored, but just left to become overgrown, while some areas which were never quarried are now covered in trees and scrub because grazing has ceased

With the exception of the open grassland at Nyatt and Barton Fields nothing now resembles the landscape that had existed before 1950. The resulting habitat types are much more diverse than before gravel extraction and also richer. They include large lakes left by gravel extraction, gravel pits filled with pulverised fuel ash, wet woodland and ponds, and original grassland. Find out more below or on the map. 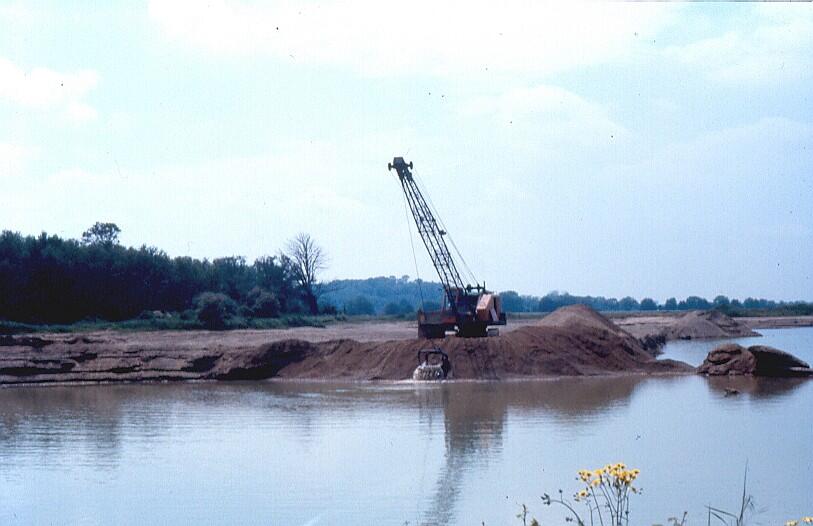 The large lakes which give the Radley Lakes area its name are former gravel pits which have filled naturally with groundwater.  All are scenically beautiful and attractive to water fowl but they differ in their origins and characteristics.

Thrupp Lake and the adjacent Bullfield Lake, formerly ploughed fields called Spinages and Thrupp Close, were the first to be excavated. They are now deep lakes with steep sides. 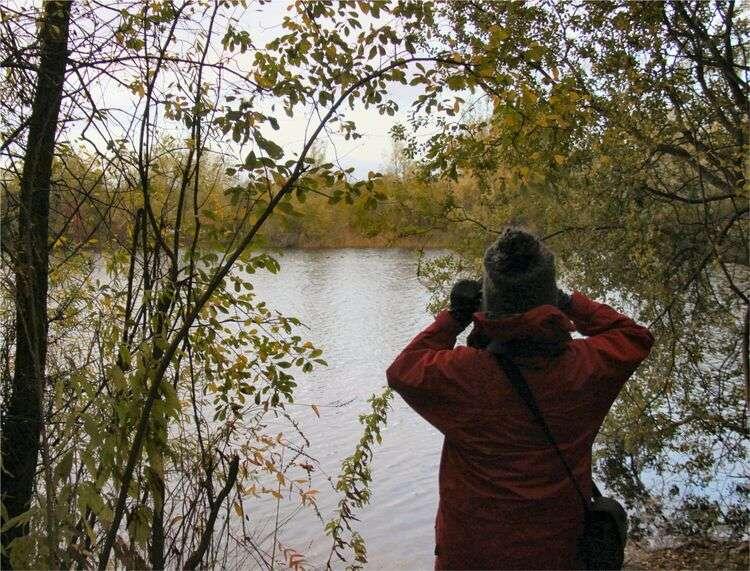 Orchard Lake and Longmead are the result of later excavation on lower land of a pasture called Calfneys and a meadow called Long Mead. Orchard Lake was not excavated to the same depth as the other lakes and is shallow-sloping, resulting in a greater variety of aquatic life.

There were two large areas of extraction in the north-east of the Lakes area, either side of the former branch railway between Abingdon and Radley. North of the line two former ploughed fields called Great Holmes Field and Little Holmes Field were dug. South of the line the area dug was mostly a pasture known as Thrupp Green (the name used here), but also a ploughed field called Sand Hills.

Once extraction was complete the Holmes Fields and Thrupp Green gravel pits initially filled with water but were then emptied, filled with pulverised fuel ash and restored to nature conservation. The resulting habitats are quite new, influenced by the alkalinity of the ash and have surprised many by their richness.  They include areas of wetland, grassland, and scrubland through which orchid glades have been cut. 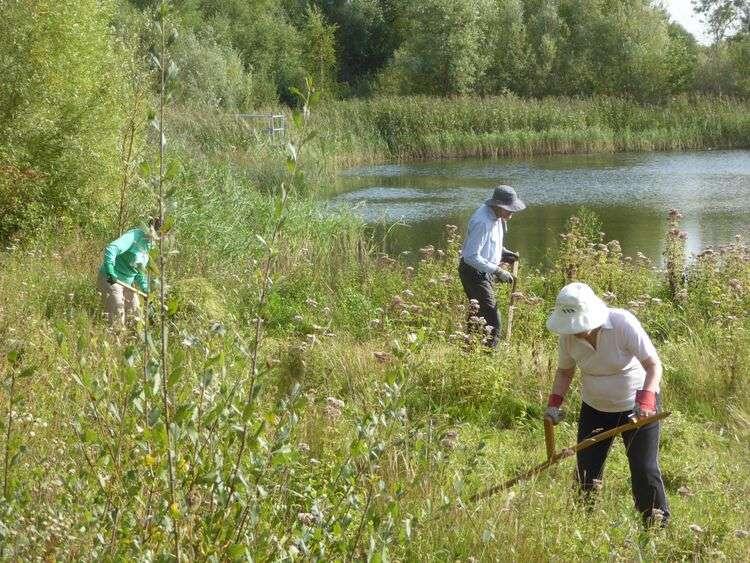 Where there were previously meadows alongside the river are now areas of woodland. Some of this is managed plantations but there are also areas of naturally generated wet woodland on land which had become neglected. Land bordering the south side of the former branch line has also generated similarly.  Much is impenetrable and tends to flood but it is highly attractive to a wide variety of wildlife 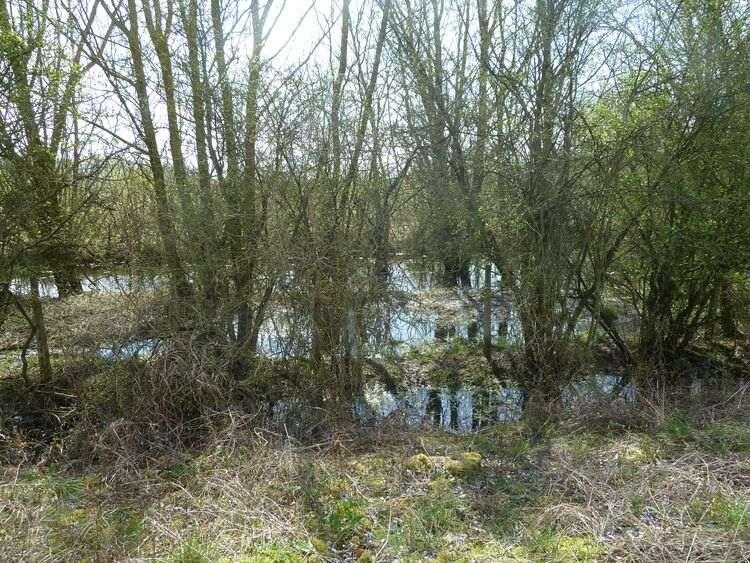 Shallow seasonal ponds have been created by land disturbance on land further away from the river. Examples are the unrestored land to the west of Thrupp Lake and the land around Longmead lake.  These are fed by rain rather than groundwater and are host to a variety of aquatic life.

Further west, and just in Abingdon, Barton Fields is another area of original grassland, attractively managed for nature conservation.  It is not believed to have any potential for gravel extraction.

Nyatt Field in the summer

Two areas in the south-west of the Lakes area remain much as before and have not been shaped by gravel activity.

Nyatt is a large field to the south of the Thrupp settlement, which is crossed by Nyatt Ford, at one time the channel of the Thames. It is the home of typical meadow flora. There remains, however, gravel under this field with current proposals for extraction. If this goes ahead it is hoped that it will be restored to create fresh habitats, perhaps including shallow lakes.

For a map of the Lakes area today, view here.

For more about the history of the Lakes area, view here.

For more about the wildlife encouraged by the Lakes habitats view here.

For the field patterns in the Lakes area, view here.